On Sunday 1st October 2017, the day after the CAA shoot a few of us attended the Parkfield Archers end of season handicap shoot.

Mike W, Rob, Mel, Ian C, and myself journeyed just down the road from Ely to Parkfield Archers at Wimblington to take part in their end of season handicap shoot.

Parkfield had chosen a Western round. Rob shot a Short Western (50 and 40 yards) on his American Flatbow whilst everyone else shot a standard Western (60 and 50 yards) on their recurve bows.

We set up the event tent in light rain, but managed to avoid any other rain after that, but it was very windy.  At one point Mel’s Danage target boss fell over with his arrow still in it – breaking it. The club did kindly contribute to the cost of replacing it. I could see why this happened though as the Danage only had floor pegs, we usually also put guy ropes on ours at the back.

I managed a personal best – mainly because I had never shot a Western round before. My final score was 688 with 28 golds.

Despite the weather Ely Archers all managed to come home with medals:

Ian also managed to win the raffle – with first choice on the raffle prizes – even though he’d gone home already. 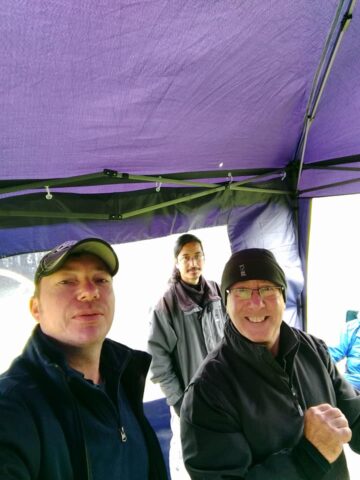