This month at the club I have planned to shoot a number of metric rounds. The club previously have never really shot any metric rounds other than WA 70m rounds. So I decided to pick out the most popular. We shall be doing a Short Metric, Long Metric and then a Half Metric.

This week was our first the Short Metric. As the longest Short Metric you can shoot is 50m and 30m, most of our archers chose that. So we had 5 targets set up at 50m to start with. One junior archer did a Short Metric III of 30m and 20m.

We had to make sure that we had some 80cm target faces as opposed to the standard 122cm targets. It was really nice to see all the bosses lined up in a row, it felt like a tournament. The smaller target faces also made you try and concentrate more and at time they were tricky. Especially when you are 10 zone scoring.

I finished with a round of 516 out of 720 – perhaps not my best effort. But I am still trying to get used to not using a clicker and use my back more. It would be interesting to re-do the Short Metric later on in the season when the clicker is back in use (hopefully!).

I definitely did not feel as tired on this round, so either I am using my back more, or I am varying my draw length when I get tired so it makes it feel less taxing. Now it seems to be my right hand which aches more, and as I am a left-handed archer – that’s the arm I hold my bow with!

Next week we have a Long Metric, but unfortunately that’s all on 122cm target faces. Plus do I try and shoot the 90m and 70m round or stick to a 60m and 50m round? 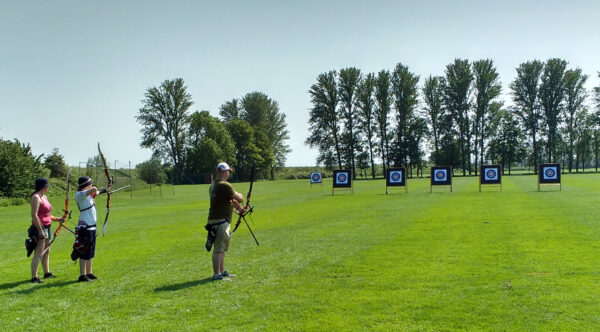