Today everyone shot a Portsmouth, I didn’t bother to score today as I knew I would have a lot of tuning to do now I had increased my draw weight to 40lb. I wasn’t wrong, as I don’t have access to 20 yards at home, there was some work to do with the button (plunger) on the riser.

On my first few ends the arrows were grouping nicely but all going to the left, so I needed to wind the button in a little bit with the provided allen keys that came with my Shibuya DX button.

It took me a few ends of tweaking the button to get the arrows dead centre. I then found that my metal arrow rest had moved inward towards the riser a bit, but in reality it could have been that the button actually moved out a bit pushing the arrow over and not the arrow rest moving at all. But I altered the position of the arrow rest and everything seemed OK.

I carried on shooting at a standard 60cm Portsmouth target after a good few ends a space appeared on the line where a compounder had been shooting at a FITA 3 spot vertical face (40cm) which overall are 22cm x 66cm. I had never shot at these before, and boy do these seem small at 20 yards. By now my strength was letting me down, but I put a few ends in and was reasonably happy with my results. Very different scores to the compound bow shooting beside me though.

I did try shooting at all 3 faces, but in the end concentrated on shooting at the centre circle in order to get a feeling for what my aim and grouping was like. 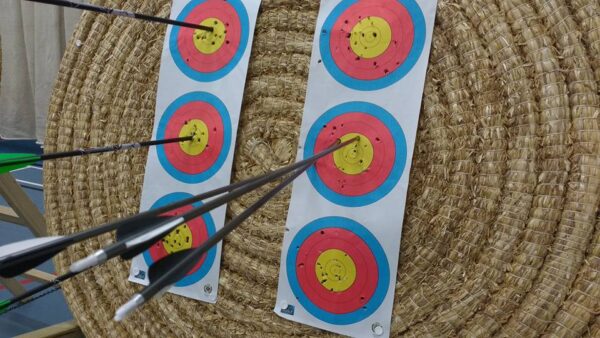