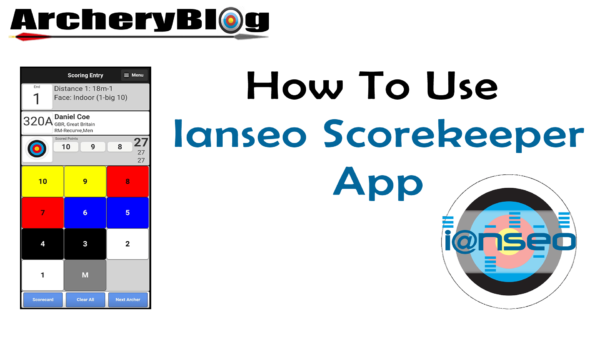 The first time I needed to use the Ianseo Scorekeeper app was when shooting the World Archery online 2020/2021 competition. But it seemed there was no way to get to use the app before you actually needed to use it on the day after shooting your first end of arrows.

Now the app should display your details such as name, target number etc. These should match what is on the paper scoresheet.

You can then continue to enter your first end of arrows.

If there are several archers on your target, the app may move to the next archer so that you can record all the scores.

The app will show you your cumulative scores on a scorecard and if you are doing more than one distance, you will have to scan another QR code on the scoresheet for the next distance (e.g. WA 18m may be split into 2x 30 arrows).

The Ianseo Scorekeeper app works really well and its easy to enter scores and modify them. The only problem I had was when I’d finished one distance I could not somehow get to the section where you can the 2nd QR code, but that may have just been my fault. The 2nd time I used it, it was a lot easier.

How to use the Ianseo Scorekeeper App Video

If you’d rather see me talking about the app and actually see my using it, please watch my Ianseo Scorekeeper video on my YouTube channel.