Karl and I took a trip to Aim4Sport on Thursday. Karl was after a new clicker as his carbon Win and Win clicker had snapped in two in his bag. So he was not going to buy another one – so opted for a metal Beiter clicker. He then found it was a slightly longer fit than the Win and Win carbon clicker so had his Easton ACC arrows shortened by about a centimetre. He also tried out and then purchased some Axiom 10″ side rods together with a standard Mybo V bar and 4″ extension.

I on the other hand was after some new arrows. I didn’t know whether to go for some Easton Fatboy arrows, or stick with Easton Platinum Plus XX75 arrows with a different spine. After talking to Dave I was write about not choosing all carbon Fatboy arrows when shooting into straw on a shared target. So I went for XX75 2016 arrows. I shot with them on the Friday night at the club and they seem a bit thicker than my 1916 arrows. The only downside is that when you go above 1916 you can’t have the G nock small nocks anymore, so I have the Easton Super Nocks, which I don’t know if I like them yet, as they are a bit longer than the G nock small.

Easton Super Nock at the top. 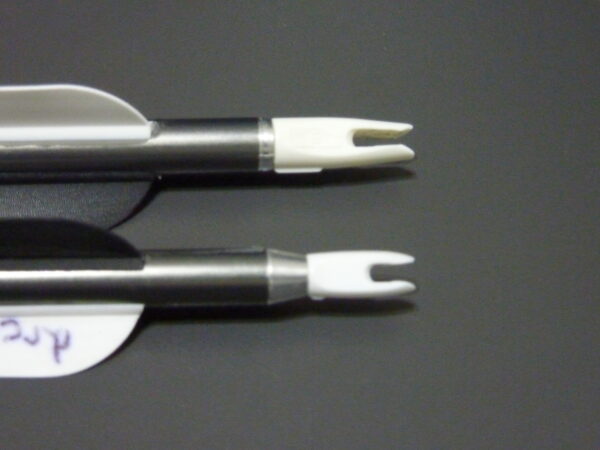 I also purchased a cliniband/theraband and a new stand that was sitting the bargain bin. The Cartel stand allows me to use it like a normal stand with the bow horizontal, or to place the bow in the stand vertically. Must not forget I also purchased a standard Mybo 45 degree V bar as well. I decided to give it a go as the other V bar I have is 35 degrees, so I wanted to see if it made a difference. So I am now going to go back to trying short rods again after previously finding them too heavy, as they add on about 550-600g to your set up.